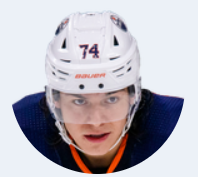 Note: This article has been updated with the Bear contract for $2M.

Long Term Injury Reserve (LTIR) is a commonly used tool for teams to be cap compliant. Here is an overview of how it works.  Quick summary about LTIR:

-Allows a team to exceed the $81.5M Salary Cap by up to the LTIR Pool

-LTIR Pool is calculated in 1 of 2 ways:

1) With the player on LTIR, the pool is how much a team is over the cap

2) If a team is under the cap without the use of LTIR, the pool is the injured player's cap hit less how much space the team has when the player is placed on LTIR

In order to maximize the LTIR pool, teams will make roster moves before the opening roster submission.

Using the Oilers as an example, below is how they might have their LTIR pool determined.

After signing Ethan Bear on December 28, PuckPedia's projected Oilers roster includes 24 players, and assumes Koekkoek and Haas on the roster, and Lagesson, Nygard, P. Russell, and Benson off. Klefbom and his $4.167M Cap Hit is not yet on LTIR. This roster is $2,214,167 projected over the cap.

LTIR Pool Method 1: LTIR Pool is how much the team is over the cap with the player on LTIR

With this LTIR Pool Method, the LTIR pool will just be the current amount over the cap. They are now $2,214,167 over the cap with 24 players, and putting Klefbom on LTIR will have them at the maximum 23 players on the roster, with an LTIR pool of $2,214,167.  When compared to Klefbom's $4.167M Cap Hit, this would leave their LTIR pool almost $2M less than it possibly could be. Therefore, this outcome is unlikely.

However, if 2 players other than Bear were injured or unavailable prior to the start of camp, then things change considerably.  If a player is injured, or is under required quarantine when rosters are submitted on Jan 12, they would not count towards the 23 active roster limit. That would allow the Oilers to have 2 additional players on the roster counting towards the Cap.  If they used it on players like Theodor Lennstrom ($925K) & Cooper Marody ($925K), now they're at the existing $2,214,167 over the cap on the projected roster plus Lennstrom's $925K & Marody's $925K, which is $4,064,167 over the cap.

With Klefbom on LTIR and 2 players on IR or COVID Quarantine Non-Roster, they have the maximum 23 players on the active roster.  In this situation, their LTIR Pool is $4,064,167, which means they can exceed the cap by that amount.  If they submit their opening roster like this, they could then send Lennstrom & Marody down, be $2,214,167 over the cap with the ability to exceed the cap by $4,064,167. 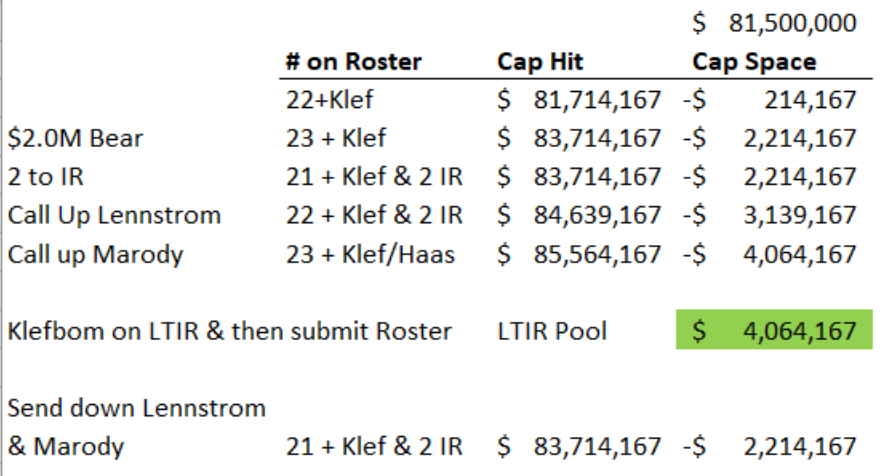 With this method, the goal is to submit the opening roster (minimum 20 players) under the $81.5M salary cap, with being as close to the cap as possible.  This becomes an exercise of finding the right combination of players to send down to make the numbers work, and balancing who needs waivers to be sent off the roster and is a risk of getting claimed.

A reminder that our baseline roster to start with is $2,214,167 projected over the cap for 23 players (plus Klefbom) and includes Koekkoek on the Roster and Lagesson off the roster.

They need to clear just over $2.2M Cap Hit for the opening roster.  They could do this by sending down Yamamoto ($894K) who does not need waivers, and then 2 players each with a cap hit over $1.075M (the burying threshold), which is the most cap space saved by sending someone down. Let's assume that's James Neal & Alex Chiasson. That still puts them with $830K cap space, which is too much as it reduces the LTIR Pool by that amount. Therefore, assume they add Tyler Benson ($808K) to the projected roster (in reality they would just not send him down yet). This leaves them with a Cap Hit of $81,478,333, which is $21,667 under the Salary Cap, and includes 21 players on the roster plus Klefbom.

In this example, before the opening roster, Neal and Chiasson are sent down and need to clear waivers, Yamamoto is sent down and does not require waivers, and Benson is on the opening roster.  After these moves, the Oilers would submit this roster with $22K Cap Space. Shortly after that submission, they would place Klefbom on LTIR, and their LTIR Pool would be his $4,167,000 Cap Hit minus the $21,667 Cap Space, for an LTIR pool of $4,145,333. They could then call up the 3 players sent down, send Benson down, and they would start the year $2.214M over the cap with 23 players on the roster (plus Klefbom on LTIR) and the ability to exceed the cap by $4.145M. 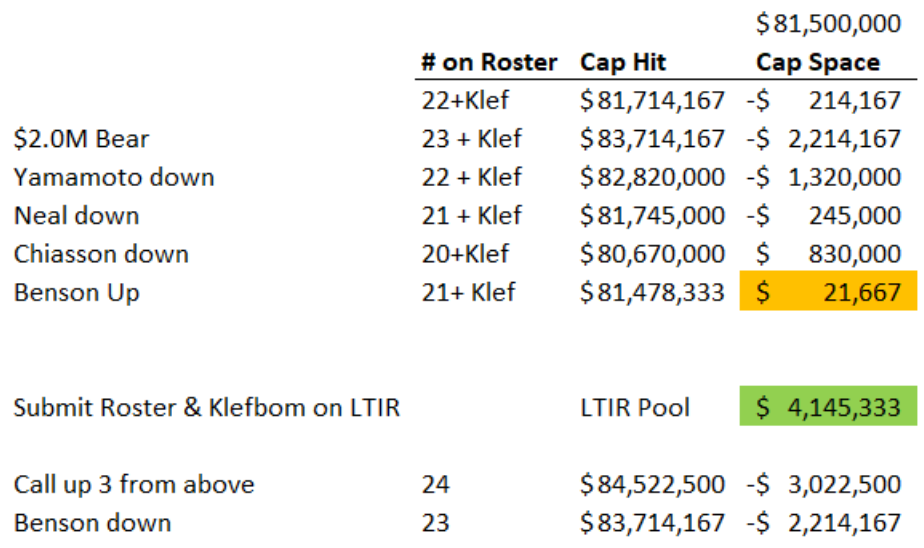 Maximizing the LTIR pool becomes a puzzle of trying to fit the right combination of players together.  The Oilers were used in this example, but the methodology and considerations would be similar for any team potentially utilizing LTIR.