For years, fans could receive insight into the hockey world through reading various polls and surveys of players, coaches, management and media. However, it is rare to see the perspective of another key group whose thoughts and ideas have historically been less available – the Agents.

The NHL Agents have a direct impact on the distribution of hockey revenue, as their negotiations divvy up the player money pie. From this lens, Agents offer a unique perspective on the CBA rules, teams, players, and the business of hockey. The agents are responsible for negotiating the player contracts within the context of the CBA rules, so, naturally, they have ideas on how to improve those rules. As Bill Parcells famously said, “if they want you to cook the dinner, at least they ought to let you shop for some of the groceries”.  In addition, just as players generally offer the most interesting viewpoint on coaches, agents are uniquely positioned to offer opinions on GM’s.

PuckPedia is the exclusive home of the NHL Agent Leader-Board (PuckPedia.com/Agents), where agents are ranked by contracts and their client lists are displayed. To provide even more interesting agent material, PuckPedia conducted an anonymous survey of NHL Agents.  From late January to early February, a group of 25 agents, representing the full range on the Agent Leader-Board, confidentially and anonymously shared their opinions.  Please note that this survey was conducted pre-Covid-19 shutdown, so perhaps their responses would differ if they were polled in today’s climate. 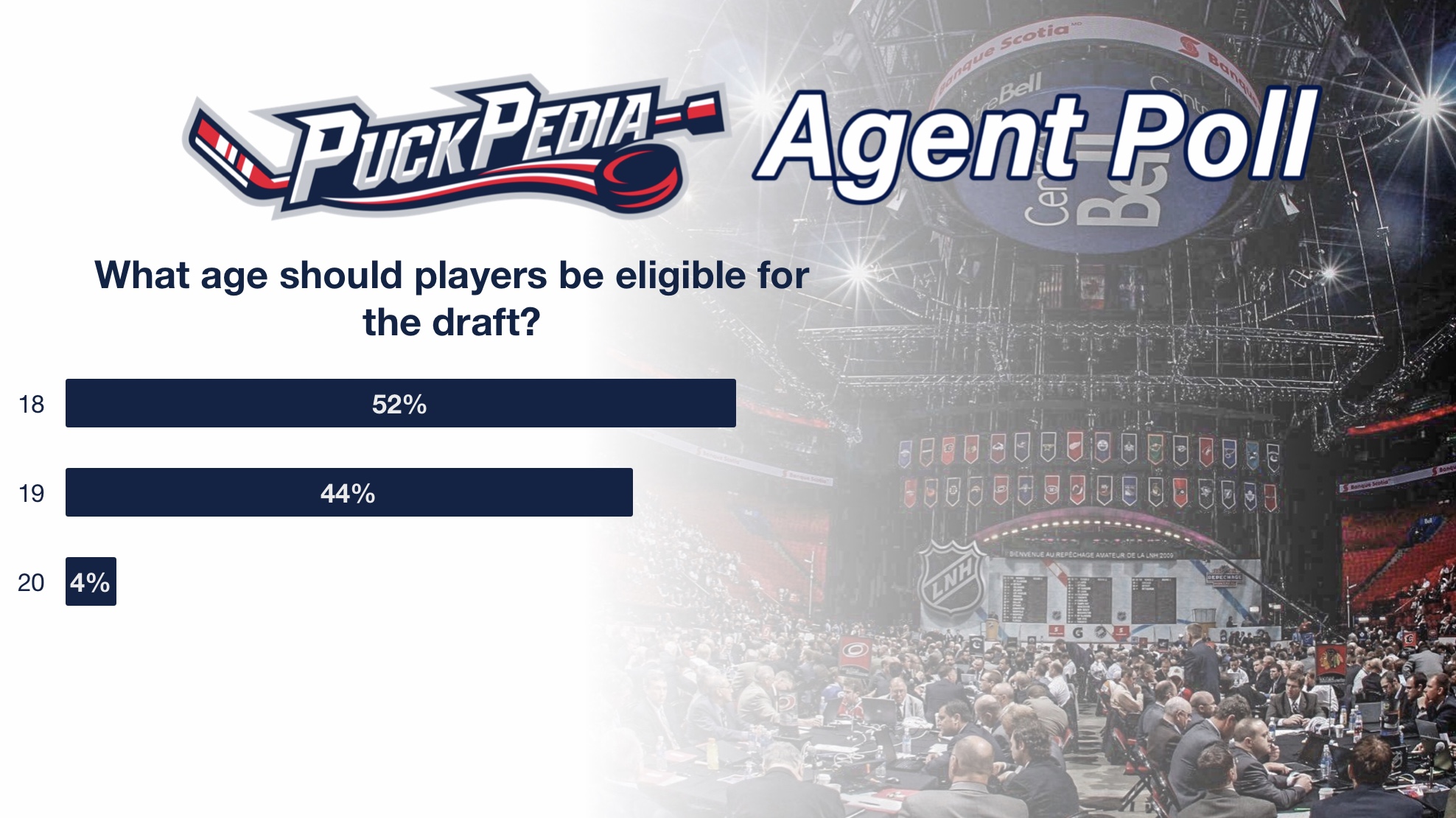 Keeping the draft eligible age at the current 18 represented just over half of the votes.  Not surprisingly, increasing the age of draft eligible players to 19 came in close second.  Pushing the age of the draft back has been a topic of discussion for years.  Perhaps the split among agents is illustrative of the lack of consensus that still exists, and the unlikelihood of making such a change just yet. 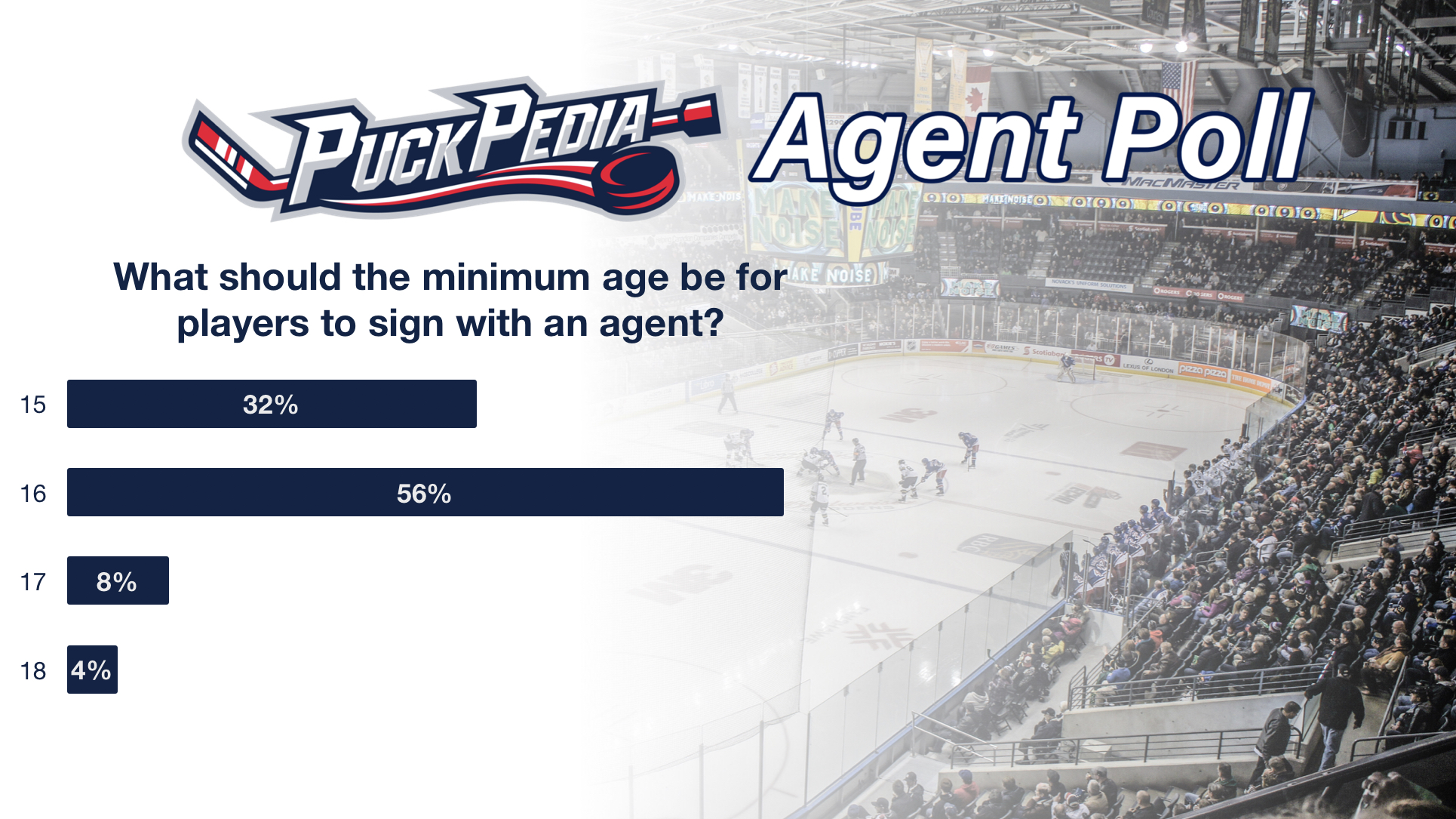 Currently, certified agents may begin “advising” players at the age of 14.  Agents were asked what the minimum age should be for signing clients—the question was left open-ended (not multiple choice).  Notably, none of the agents wanted to keep the minimum signing age at 14. The most popular answer was 16, followed by 15.  Some agents felt that the minimum age should be closer to their draft eligibility at age 17/18.  In separate discussions with agents, they seem to share a common frustration in being forced to compete for clients who are very young, so the results of this poll seem to confirm that widespread feeling. 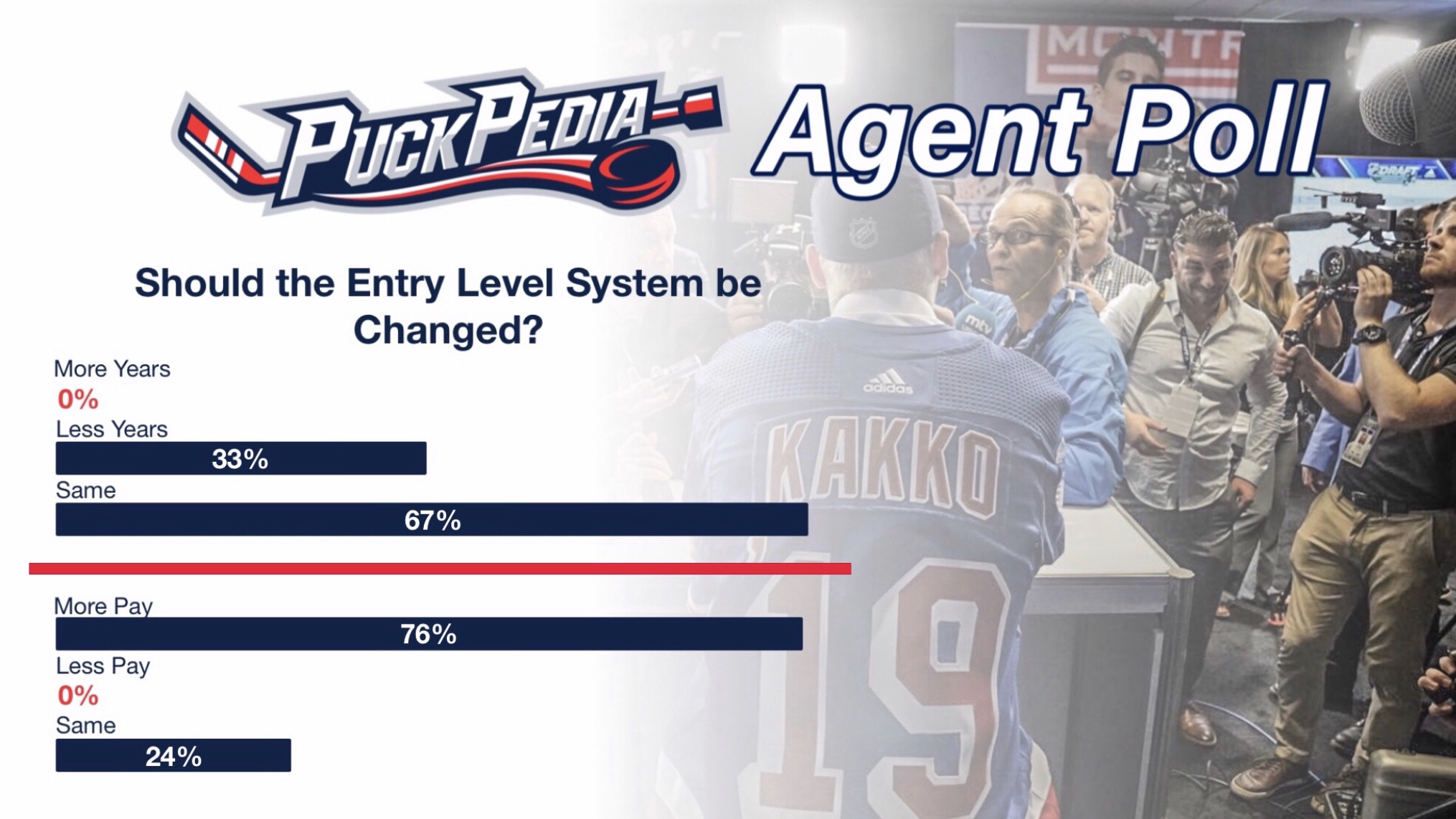 This was a two-part question on potentially changing the Entry Level system, where a player’s first NHL contract is limited in terms of the number of years and the amount they can be paid.  Once a player has completed their entry level deal, there are no longer special restrictions on their contract.  Two-Thirds thought that Entry Level contracts should continue with the status quo for number of years (most are 3 years, with 2 and 1-year entry level deals required for older rookies).  One-third thought that it should be for less years.  For entry level compensation (the current maximum base salary and signing bonus is $925K/year), an overwhelming majority (74%) thought it should be for more pay. Since the players overall share of revenue is fixed at 50%, the entry level system is a mechanism that limits how much of the pie goes to rookies and younger players as compared to more experienced players.  Taking these results together, the majority of agents think that while entry level contracts should remain with the current lengths, players on their first contract should receive more pay than the current $925K/year at the expense of older players. 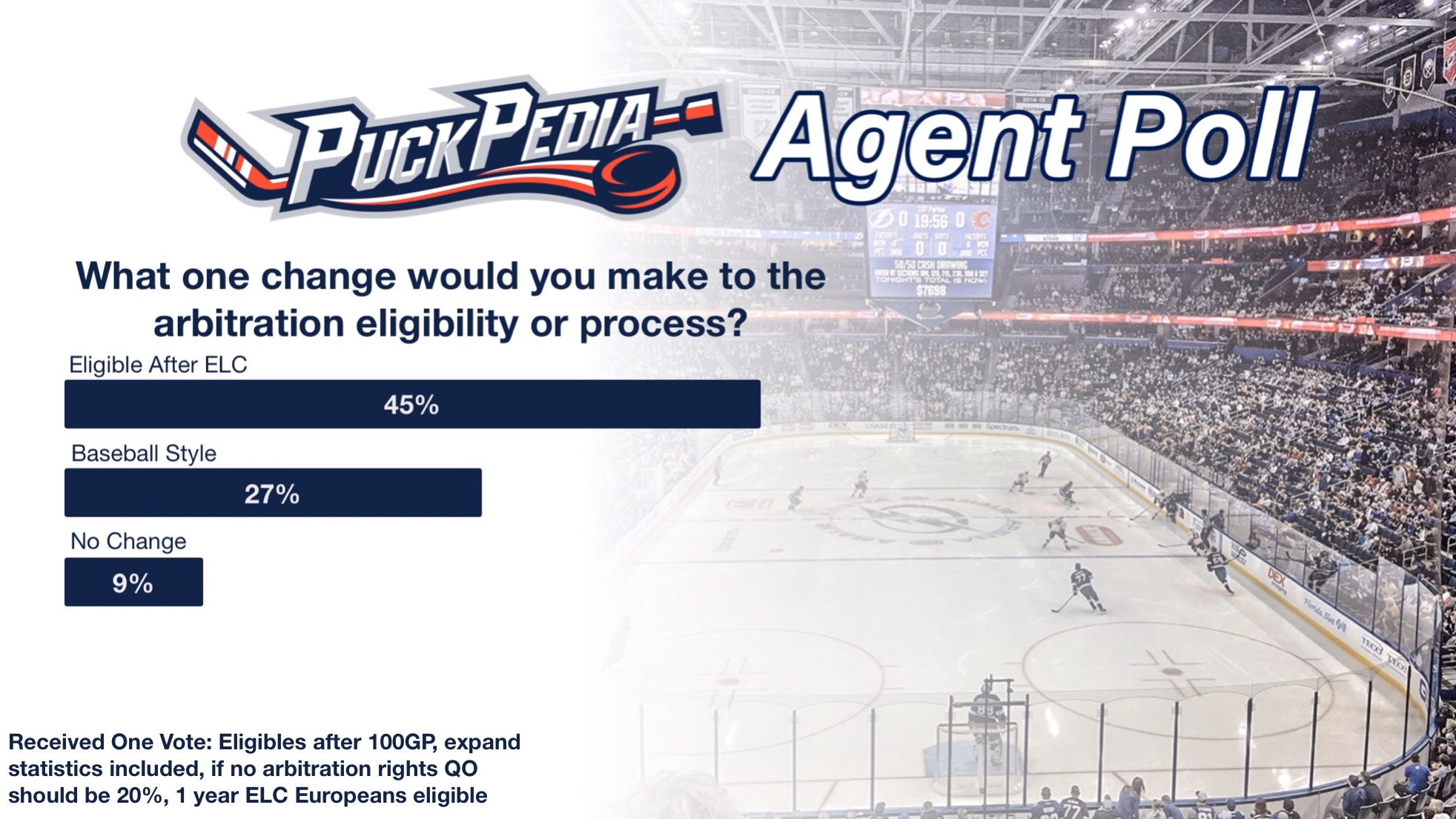 Arbitration is a process available to certain restricted free agents who can opt into having a neutral third party determine their contract.  Eligibility for arbitration is based on the # of years of professional experience, with most players reaching arbitration eligibility after their fourth NHL season.  The most popular answer was to provide arbitration eligibility immediately after an Entry Level Deal is completed.  This would remove the one contract where an NHL team has the most leverage as the player has no options other than to agree to the GM’s offer or sit out. However, by adding arbitration to this stage, it might make resolving these contracts easier by having a path for a definite outcome.  The next most popular answer was “baseball style”, which means both the player and team submit a contract offer and the arbitrator must select one or the other.  Currently, the parties can submit any offer they want for arbitration, and generally the arbitrator decides on an amount close to the mid-point. This format provides an incentive for players and teams to submit potentially extreme proposals, whereas the baseball style theoretically pushes both sides’ offers closer together.

There were also some creative ideas that received 1 vote, such as increasing the qualifying offer if a player is not yet arbitration eligible, and expanding the statistics that can be presented in an arbitration hearing. 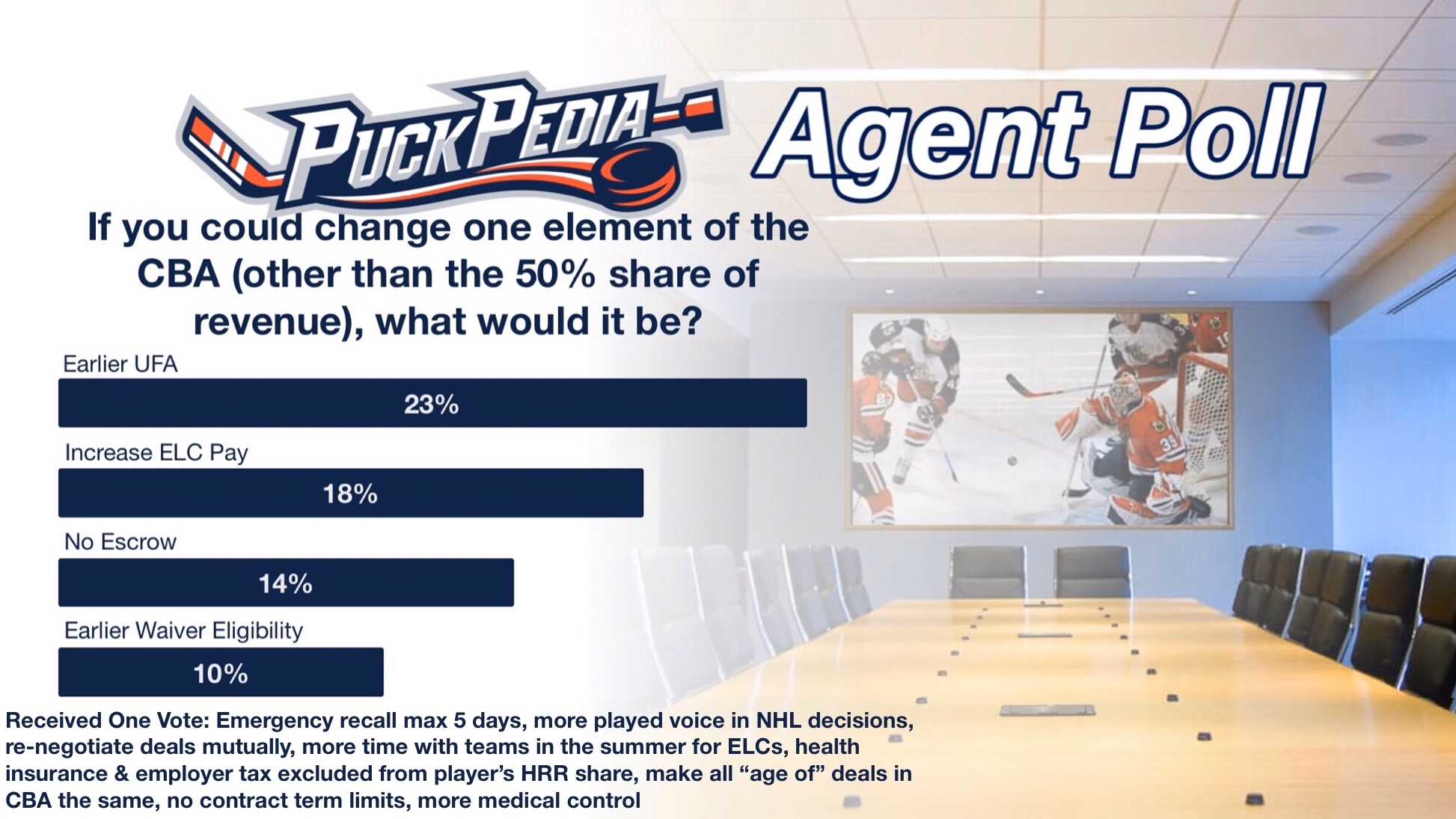 This open-ended question yielded lots of interesting suggestions.  Notably, the top 2 answers of earlier UFA eligibility and increasing Entry Level Pay both move the player salary pool from older players to those who are younger.  This shift may better reflect the value that younger players provide their teams relative to older players. Earlier waiver eligibility is an interesting answer as it forces teams to keep young players in the NHL or else risk losing them to other teams. Earlier waiver eligibility could effectively distribute younger talent throughout the league more evenly; however, it could also lead to more NHL roster spots being held by younger players at the expense of older players.

Some agents offered unique responses, which provided additional insight. For example, the idea to allow deals to be mutually re-negotiated is quite interesting, as it could potentially reduce the number of buyouts and players currently buried in the minors.  It was also exciting to hear the suggestion to make the various “Age of” definitions uniform throughout the CBA, an idea that PuckPedia officially endorses. 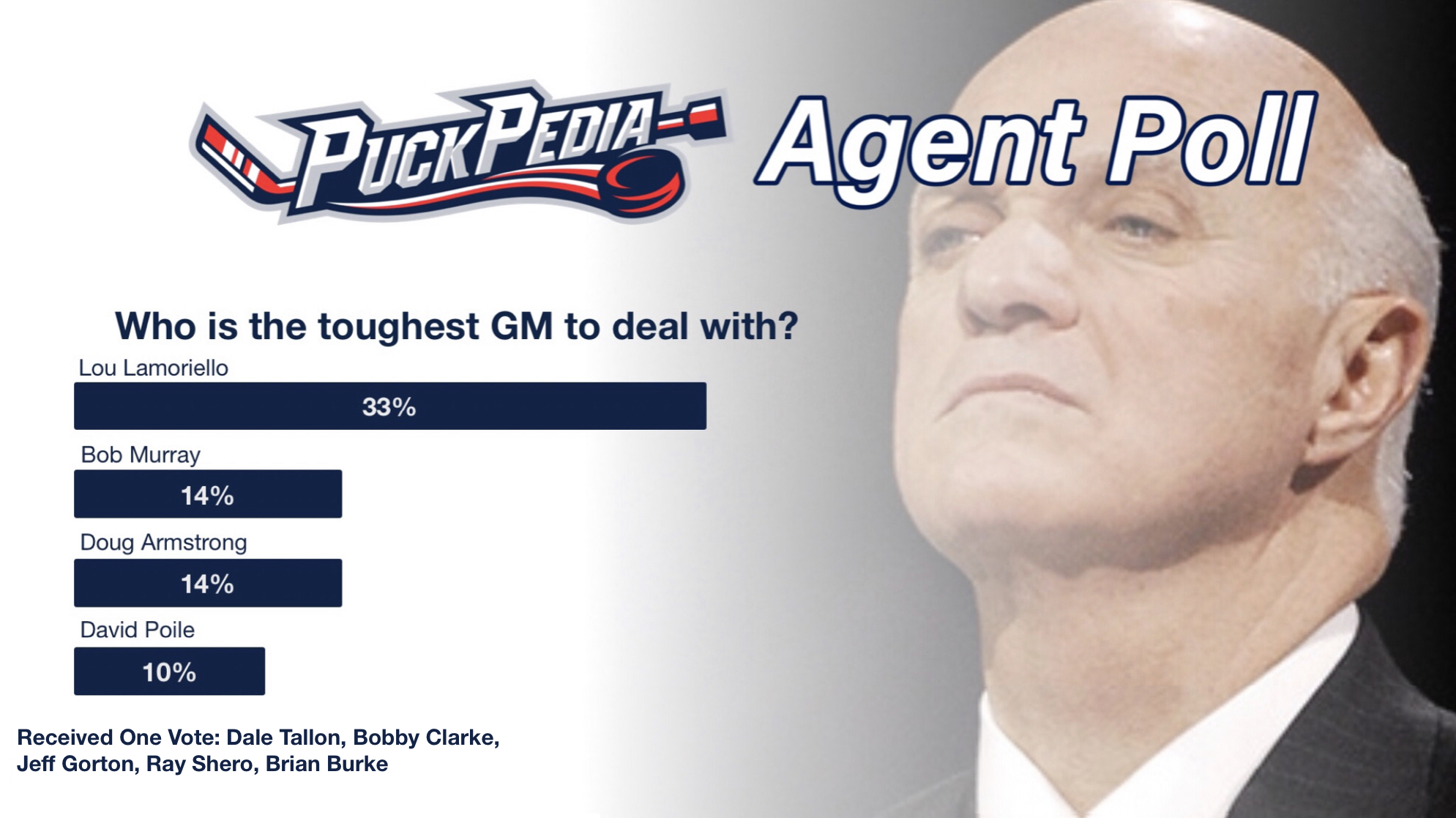 In what was likely the most predictable result, the most common response for toughest current or former GM to deal with was Lou Lamoriello (now with the Islanders) who received a third of the votes.  Next were Bob Murray and Doug Armstrong, followed by David Poile.  A couple of former GM’s received votes in Bobby Clarke and Brian Burke. 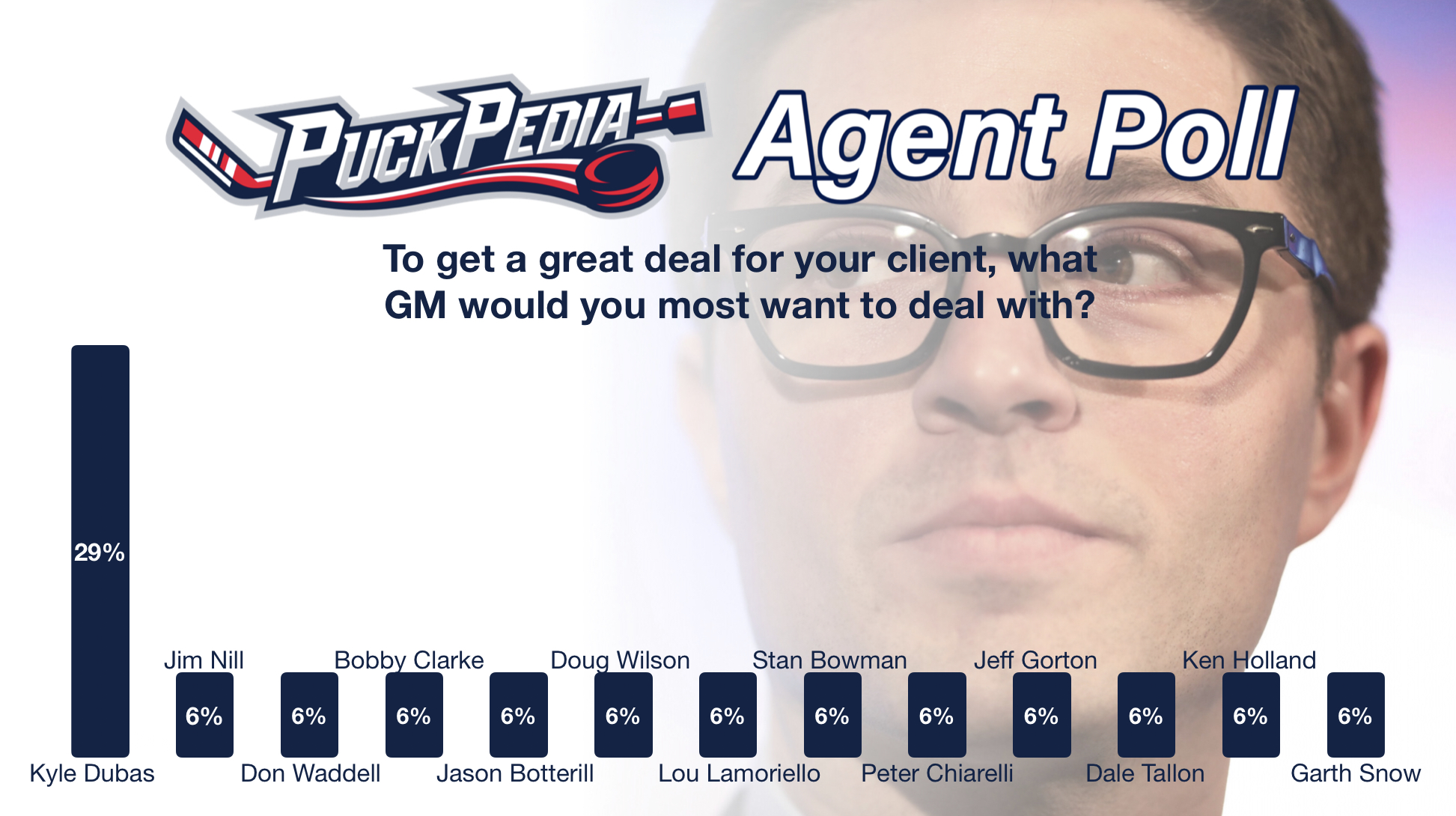 Agents were split on which current or former GM they’d prefer dealing with to get a great deal for their client. The only GM receiving multiple votes was Kyle Dubas, which may be due to some recency bias as Toronto recently signed some of the largest contracts of the last 18 months.  It was interesting to see Lou Lamoriello show up on this list as well, along with former GM’s Bobby Clarke, Peter Chiarelli, and Garth Snow. 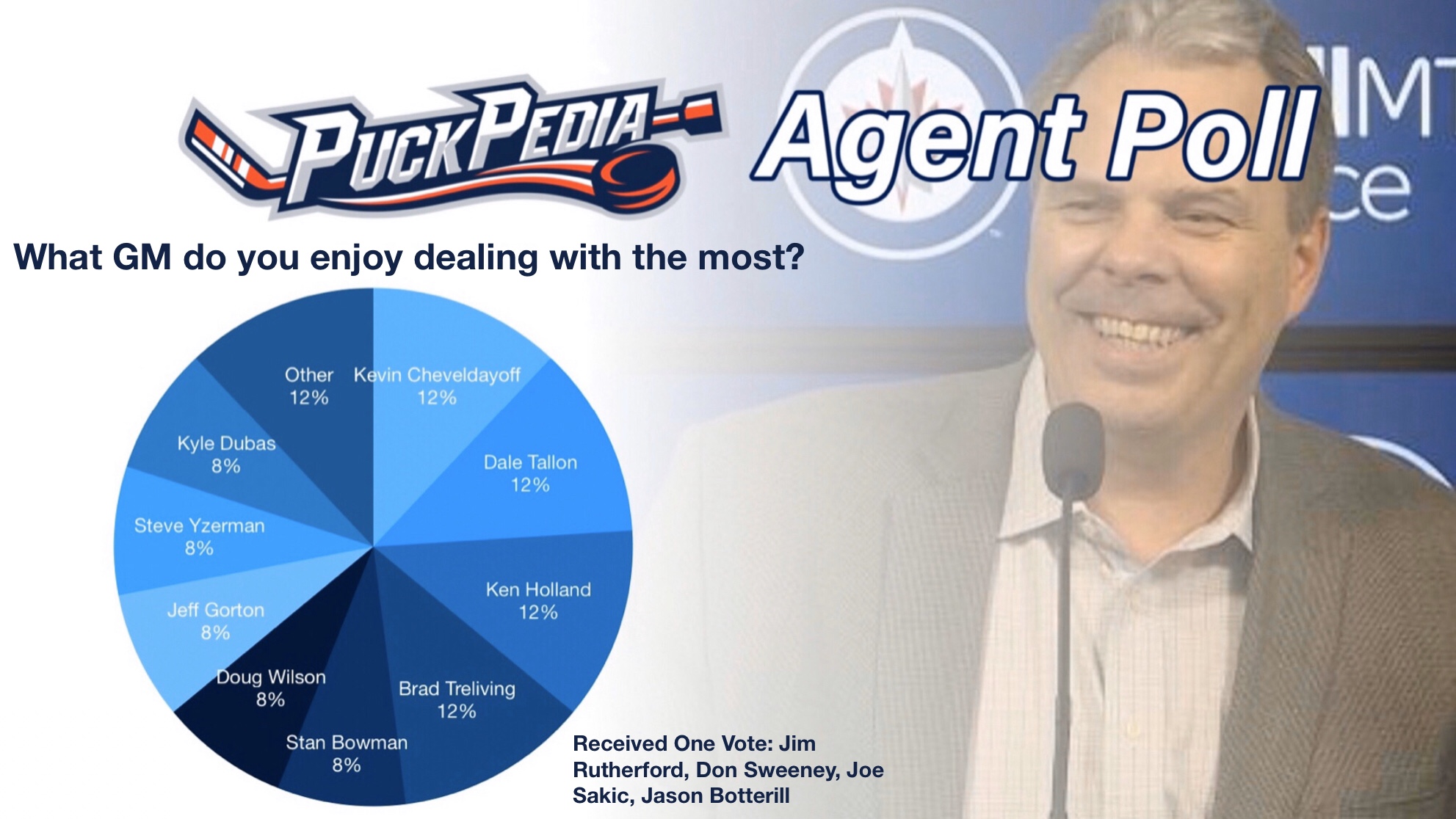 When asked which GM (current or former) agents most enjoy dealing with, the answers were quite split.  Four GM’s received the most votes: Kevin Cheveldayoff, Brad Treliving, Ken Holland, and Dale Tallon.  In total, 13 different GM’s received a vote, which may demonstrate that Agent-GM relationships aren’t as adversarial as one may expect. 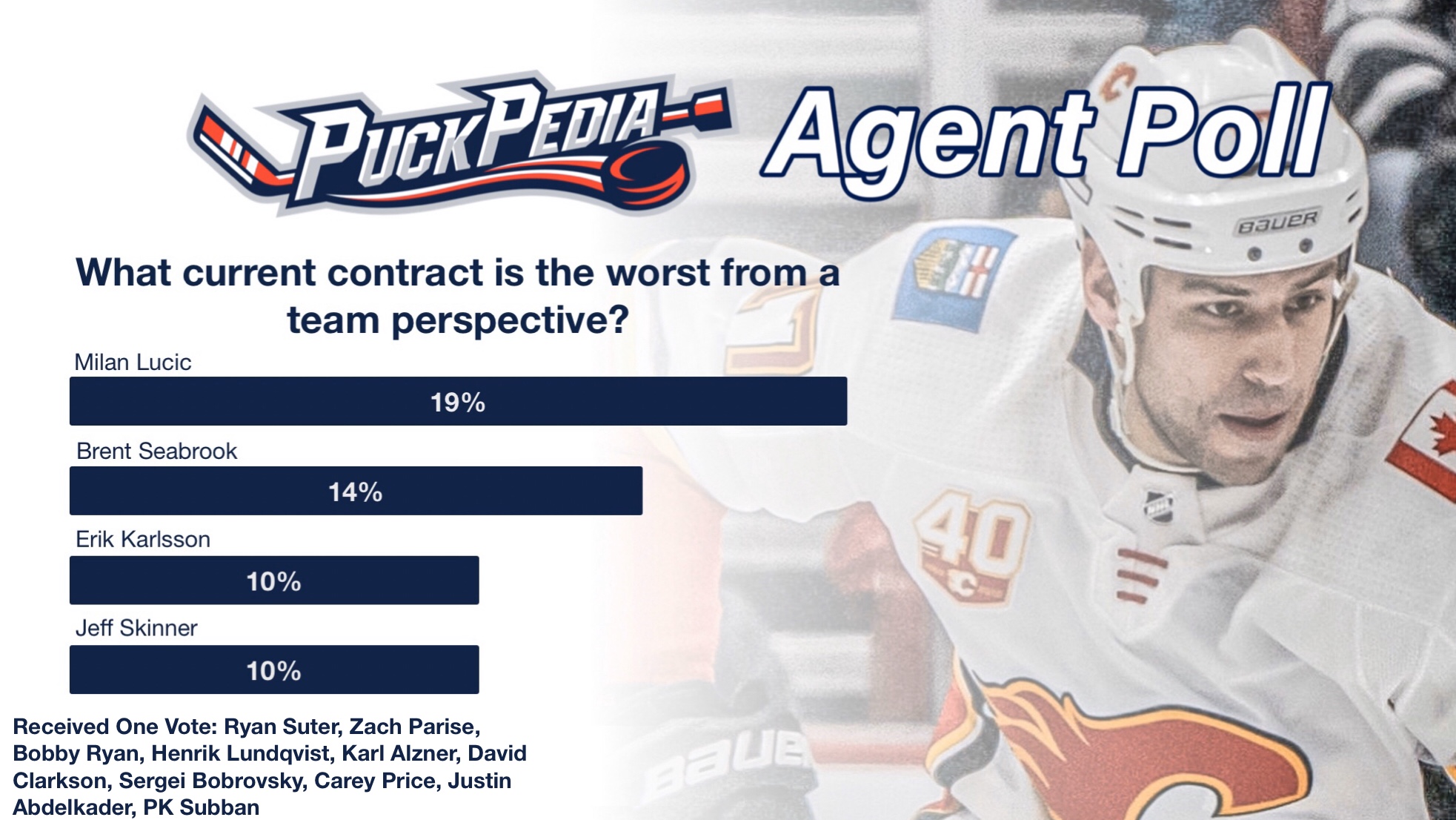 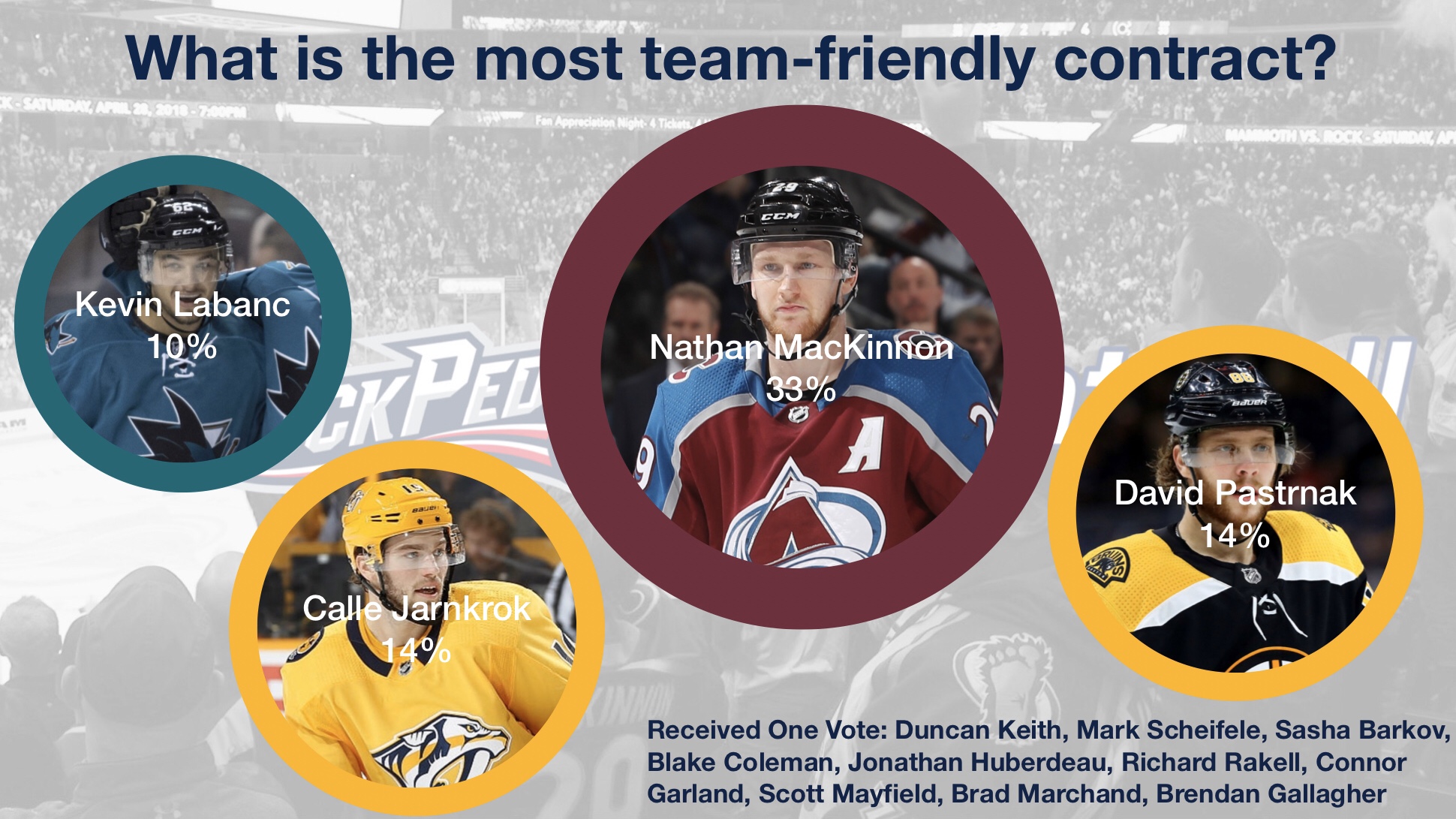 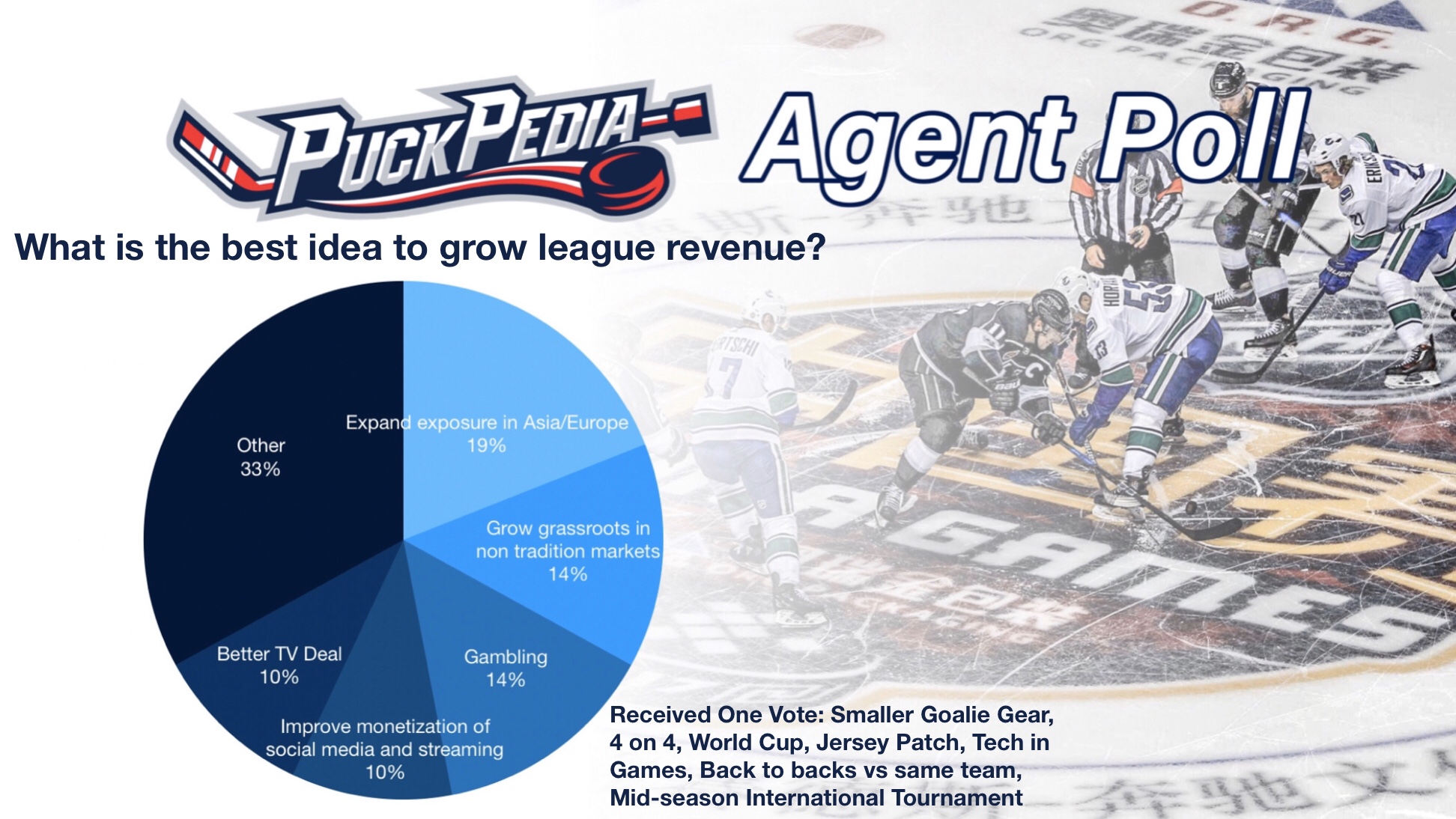 The agents offered a wide variety of ideas on how to grow league revenue.  The most popular answer was to expand exposure in Asia and Europe; this response would generally indicate that Agents were in favour of going to the 2018 Olympics in South Korea and favour going to Beijing in 2022.  Gambling was a popular idea for revenue growth, as well as growing grassroots hockey in non-traditional markets.  Several agents thought that a new TV deal was the best way to grow revenue, as well as the use of social media and streaming of games on various online platforms. There were some ideas on scheduling, such as back to teams against the same team, and a mid-season international tournament. 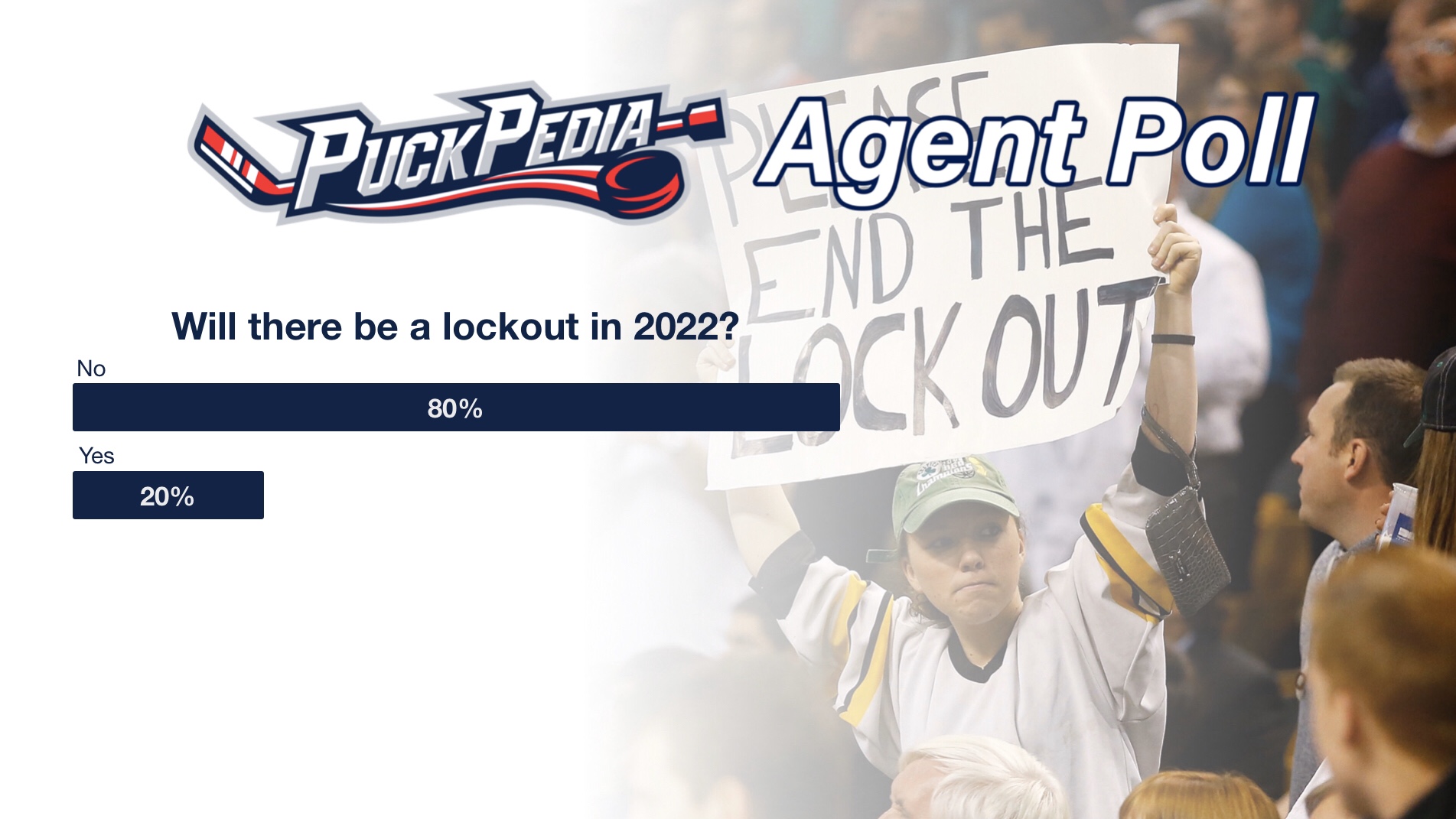 It was quite comforting to see that 80% of agents do not think there will be a lockout in 2022.  Perhaps the outlook has changed since the Covid-19 shutdown.  The positive view this year is in stark contrast to that conveyed in discussions with agents in 2018, when the majority of agents felt a lockout was inevitable. 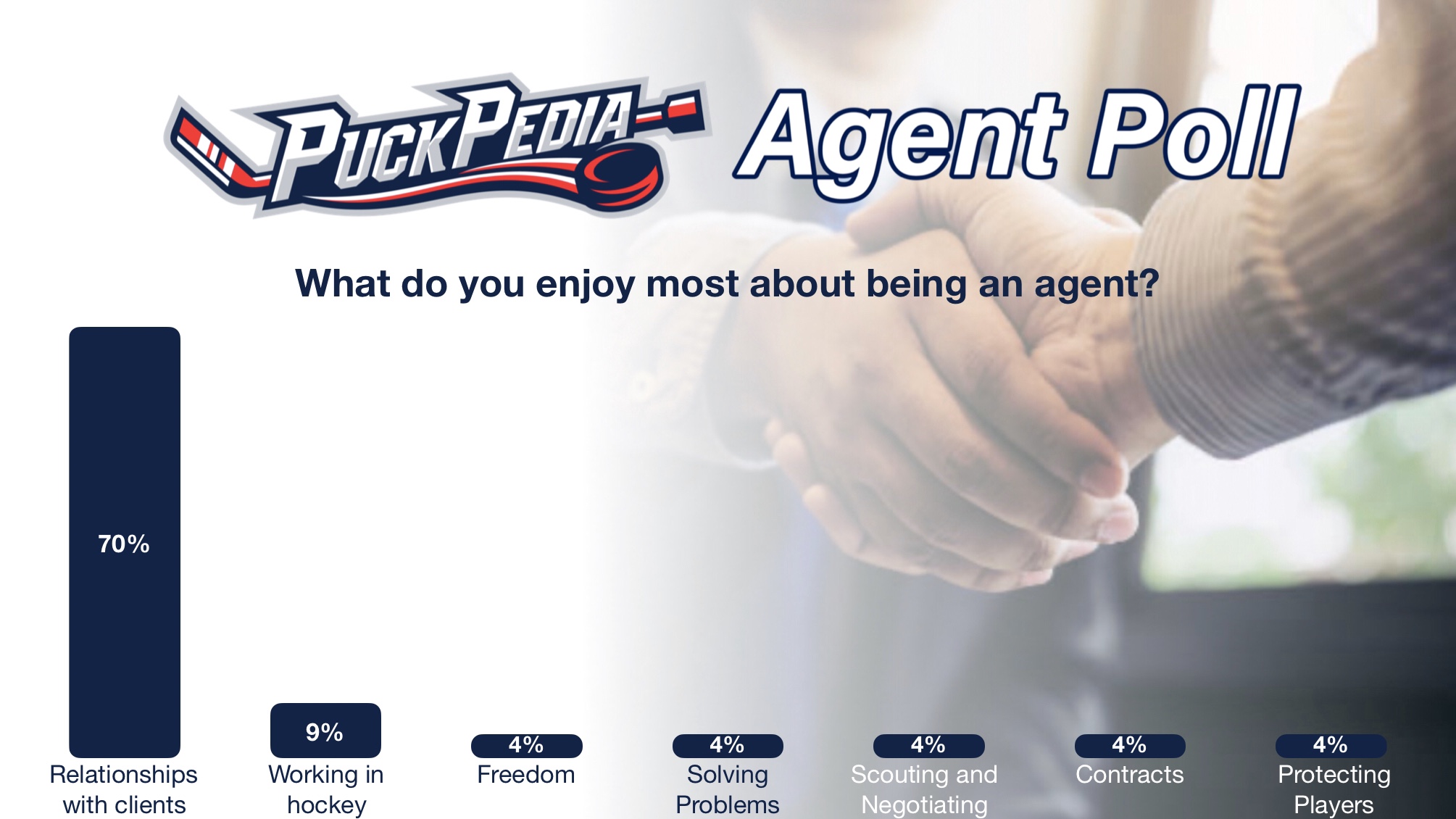 The agents were asked what they enjoyed most about their profession, and the overwhelming majority responded with a reason related to their relationships with clients. Several specifically pointed to the ability to help young players fulfil and achieve their lifelong goal as the most enjoyable aspect of being an agent. Very few responded that the most enjoyable aspect was negotiating, scouting, and executing contracts. 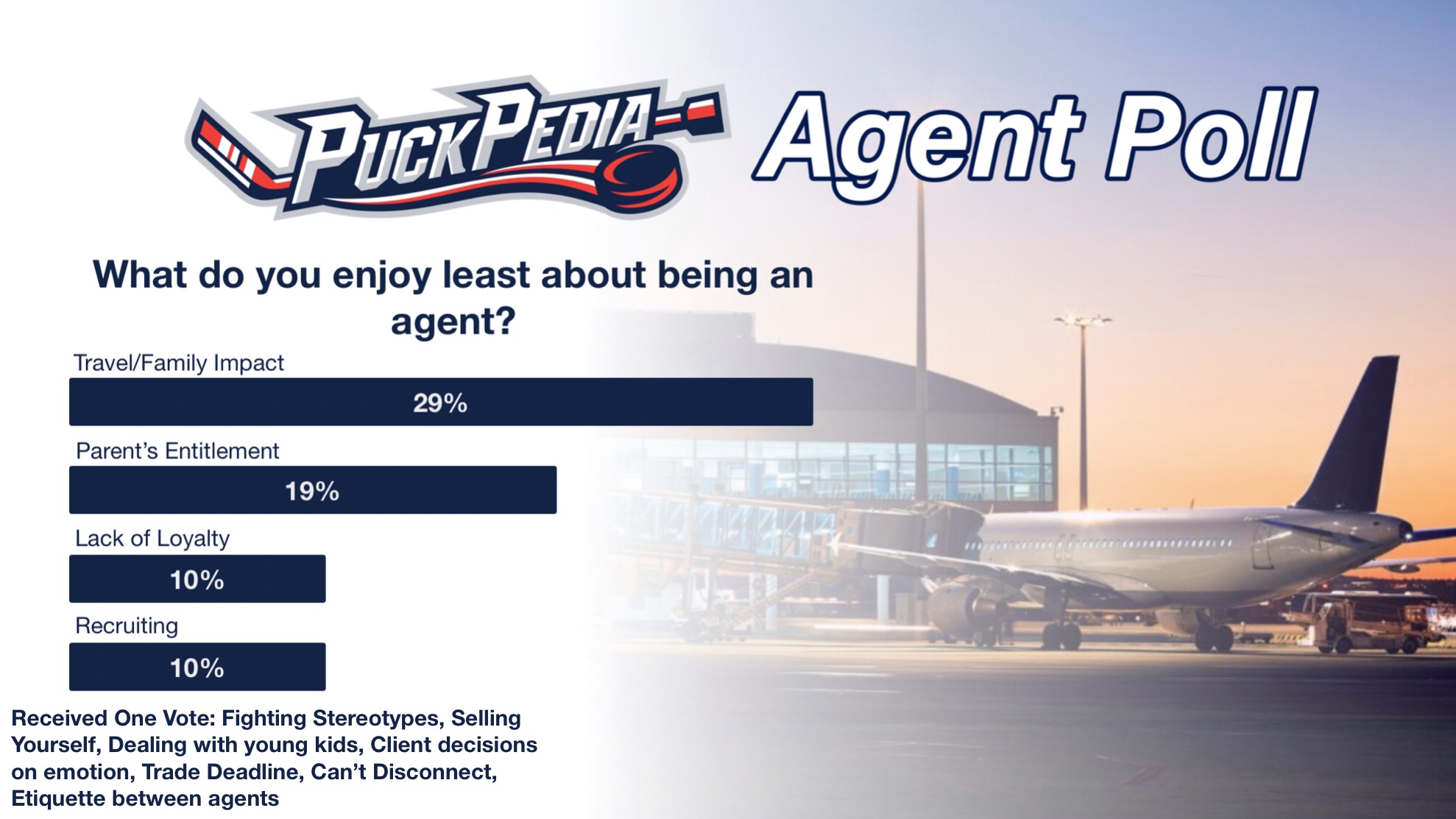 The most popular answer for least enjoyable aspect of being an agent was the amount of travel involved and the general impact on family.  Several attributed it to the long hours, or having to be constantly connected and “on-call”.  Others pointed to their frequent absence for family events and gatherings as the most difficult part.  The next most popular answer was the parents of the players who have a sense of entitlement, which was seen as frustrating and time-consuming. The competitive and cutthroat nature of the industry was also revealed with answers pointing to lack of loyalty, recruiting, and lack of etiquette between agents. 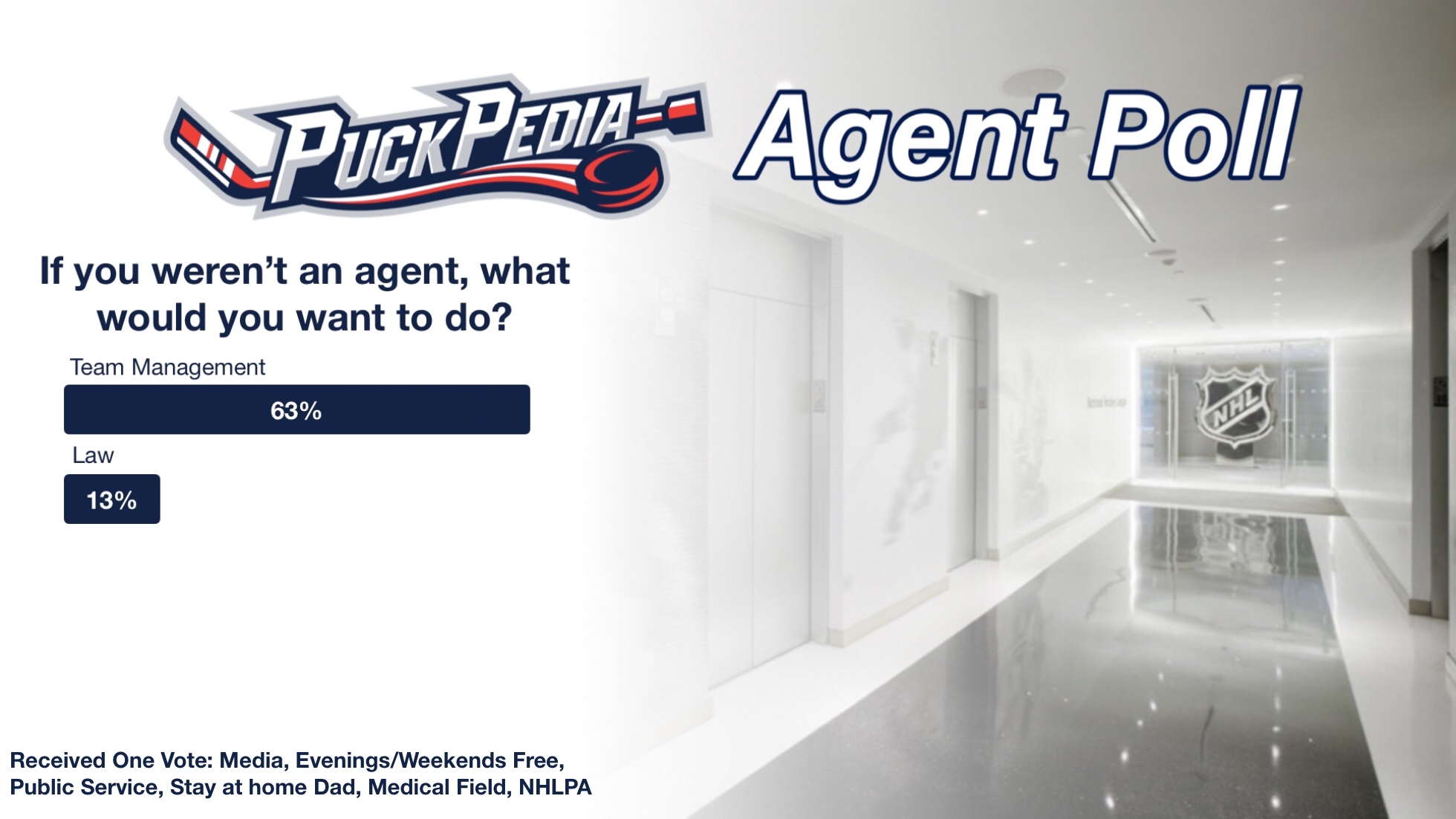 If they could choose another career path, 63% said they would want to be in team management, showing the strong interest among agents to sit on the other side of the table at some point in their career. A few responded with practicing law, which is not surprising considering a large portion of agents have a legal background.  There were some votes for non-hockey related items, such as anything with evenings/weekends free, being a stay at home Dad, and working in other fields. 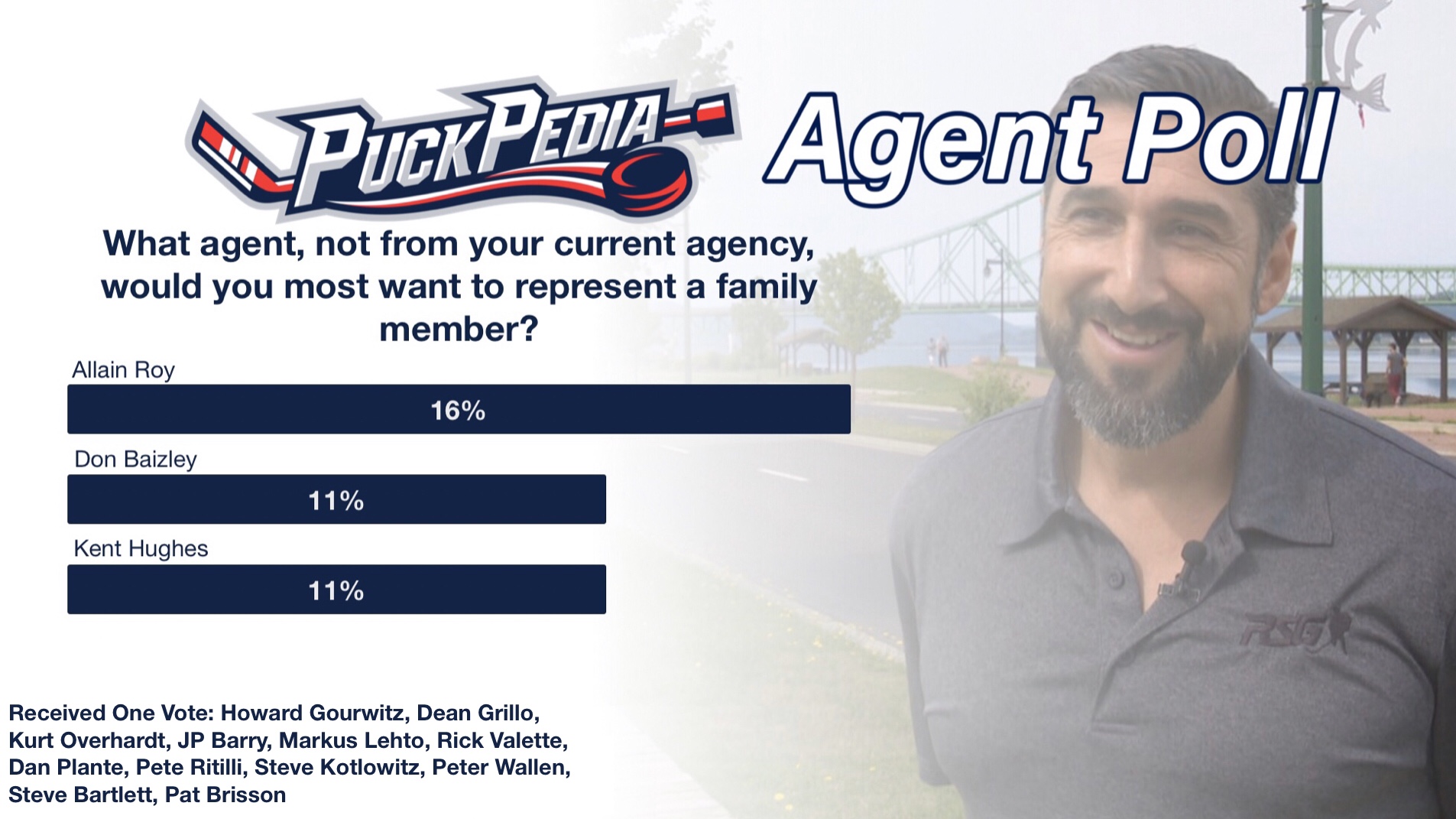 To get a sense for the reputation among their peers, the agents were asked who they would most want to represent a family member, excluding those from the same agency. The top answer was Allain Roy of RSG Hockey, who ranks 3rd in 2019-2020 in total number of active NHL contracts (69) and 7th in Total Cap Hit ($78.8M). The former Olympic goalie represents fellow netminders Ben Bishop, Jake Allen, Philipp Grubauer, Keith Kinkaid, Carter Hart and more. The late great Don Baizley tied for second most votes with Kent Hughes of Quartexx. Hughes is 17th in Total Active Contract Value ($224M), and clients include Letang, Bergeron, Matheson, and Colin White. Other agents receiving votes including many of the top agents on the Agent Leader-Board as well as some former agents. 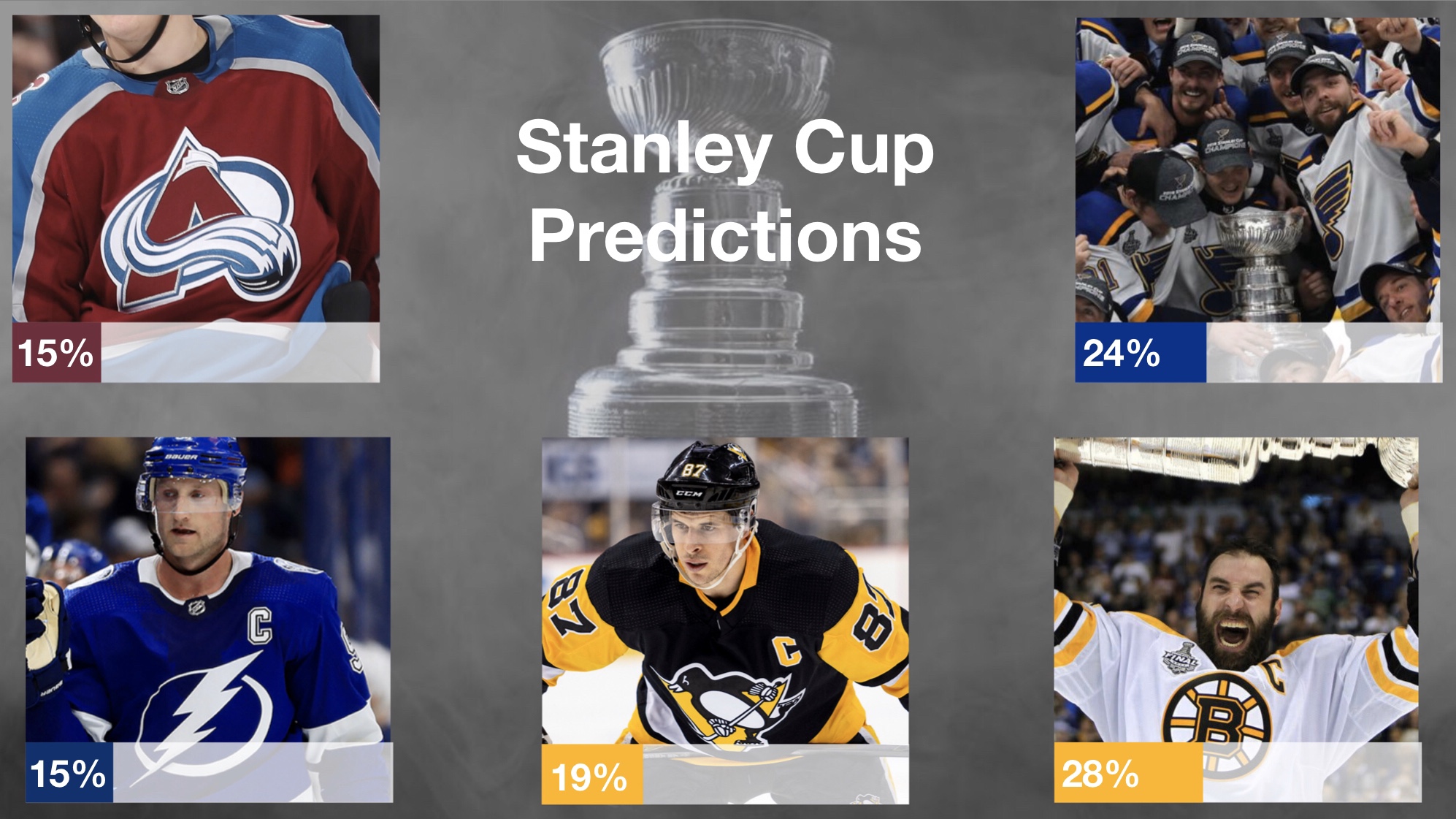 Before the trade deadline (and pandemic shut-down), the majority of agents felt that Boston was the most likely to win the Stanley Cup.  St. Louis repeating was a close second, followed by Pittsburgh. Colorado and Tampa Bay also received several votes.

Thanks for reading and seeing some insight from an important hockey stakeholder, the agents.  What do you think of these results? Share your comments below, and be sure to check out PuckPedia's Agent Leader-Board.

Part 2 (Opinions on GM's and Players)

Survey conducted by PuckPedia.com with 25 agents from January 25 to February 9, 2020.